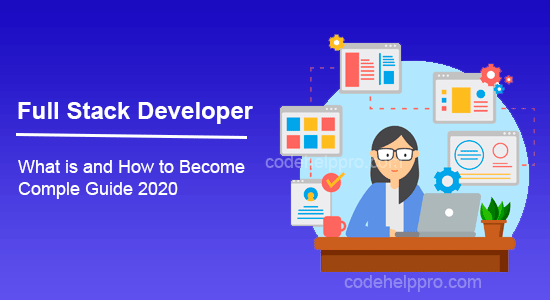 Full Stack Developer 2021: What is and How to become

Full Stack Developer: Software or Web developer who works on both client-side and server-side. This means that they can tackle projects including database, Server, API, Fronted Technology, Backend Programming Language.

In fact, “Full Stack” means the collection of technology required to complete the project.

Before going to the main topics, We will learn about the Full Stack Engineer in short.

Full Stack Engineer is the senior-level role that has the ability as Full-stack Developer and in addition to the system administration i.e. configuring and managing computer systems and networks.

Should I Become Full Stack Developer

As we already know, It means the one that can work on both front-end technology and backend programming language. Now question is that Should I become a Full Static Developer?

If you are planning to work on major technology companies like Facebook or Google then This is the right one to get into these companies. but not all the people hired by these companies are Full Stack Developers.

If you are interested in learning front-end technology and backend programming language then it is better to proceed towards the such developer.

I will discuss here some advantages and disadvantages of becoming a such Developer.

The average salary is $111,887 per year in the US according to indeed. Indeed has 14,470 job vacancy in the US. We can say that it is one of the demanding jobs in the US.

I'm a web designer and developer. I have experience in PHP, WordPress, Ajax, and HTML which helps me work on both front and back end development. I have worked on over a dozen websites.

Get the latest tutorials, examples and projects updates.

We have detected that you are using extensions to block ads. Please support us by disabling these ads blocker.